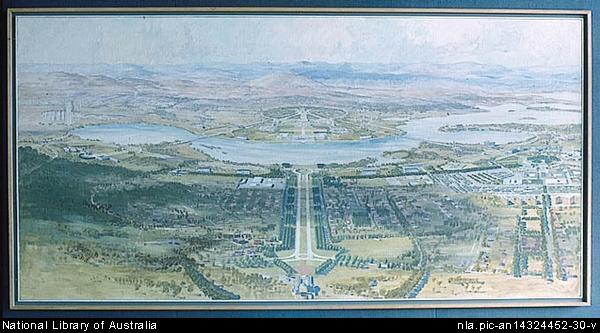 Some of you may recall me nagging you for contributions for the September 2012 edition of Phanfare. Your efforts were not in vain. I’m storing them up to publish on this blog in 2013.

But this month, I’m abusing my position at the steering wheel to make an unashamed advertisement for Canberra in 2013. You will by now be aware that it is nearly a hundred years since Lady Denman, wife of then Governor-General Lord Denman (and a champion of women’s suffrage), announced on 12 March 1913 that the name of the new Australian capital would be Canberra.

There’ll be plenty of history on show to mark the Centenary. Already the Canberra Centenary website has posted a timeline and a series of five booklets, The Keys to Canberra’s History. There’s also been much focus on the federal capital design competition, with two pieces posted on the website by Centenary of Canberra History Adviser Dr David Headon. See www.phansw.org.au/centenary-of-canberra/

As the celebrations gather momentum, more memories are surfacing. Recently I was swimming in the pool behind the Hyatt Hotel in Canberra. Also there was a white-haired woman, conscientiously striding up and down through the water. We exchanged greetings. She went on to tell me that one of the reasons she visited the pool so often was that it made her feel closer to her late husband. He was a Kay and had grown up on the dairy farm that once operated where the hotel now stands, right on the edge of the city’s parliamentary triangle. I’m hoping the Centenary will increase the momentum to capture such stories but also to stress the importance of having professional historians involved interpreting the past.

PHA NSW is exploring one way of doing just by possibly staging a CPD event in Canberra in May 2013. There’ll be plenty for members to see during a visit to the capital and ways we can fly the history flag. If you are interested in participating in such an event, please contact me at
blog@phansw.org.au

In the meantime, very best wishes for the festive season.