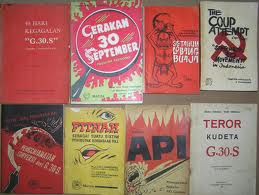 I write this blog from Indonesia. Reviewing the past year, poet and journalist Goenawan Mohamad called 2012 the year of remembering. The resonance with 1965 is deliberate. It harks back to what the Australian novelist Christopher Koch dubbed the year of living dangerously. Koch borrowed that term from Indonesia’s first president, Sukarno, who was actually describing the year before, 1964, when Indonesian politics were in turmoil.  The ferment spilled over, culminating in an attempted coup on 30 September 1965 and an ensuing massacre of at least 200,000 Indonesians caught up in a frenzy of (ostensible) anti-communist bloodletting.

For thirty or so years that September day known as Gestapu – the acronym for the Movement of the 30 September, aimed at removing generals accused of plotting to overthrow Sukarno — was swathed in mystery. Rumours about the massacre were persistent, sometimes exaggerated, often ill-informed by other prejudice especially against Chinese Indonesians. How many died at whose hand was a matter of speculation. Most perpetrators were not brought to justice.  Surviving members of the Communist Party of Indonesia (PKI) and their families led tainted lives. Those in jail faced the death penalty, waiting to hear each Independence Day if they were to be pardoned or granted another reprieve from execution. Others faced exile and discrimination.

Then came the reform period, the fifteen years since the fall of Soeharto (the major beneficiary of the failed coup), when the scabs have been picked at and attempts made to heal deep wounds. These culminated in the year of remembering. (Of course, many outside Indonesia notably Robert Cribb, an historian at the ANU, had already done much to shed light on the facts of 1965 and its aftermath.) What makes 2012 special is that the examination of the past has now reached well beyond academics and the people directly affected. 1965 is no longer taboo.  Those who have felt stigmatised by Soeharto’s New Order interpretation of history are having their memories placed on the record; and a new generation of writers is retelling the Gestapu story, some in fiction, others by way of documentary film and journalism.

As historian Asvi Warman, who is now called upon to give testimony in a variety of cases relating to Gestapu and other murky incidents of the last few decades, has commented:  “One thing is certain; the freedom of the press enjoyed by Indonesians during this era of reform has had a positive impact on the historical revelation of many issues that were suppressed in the past”.