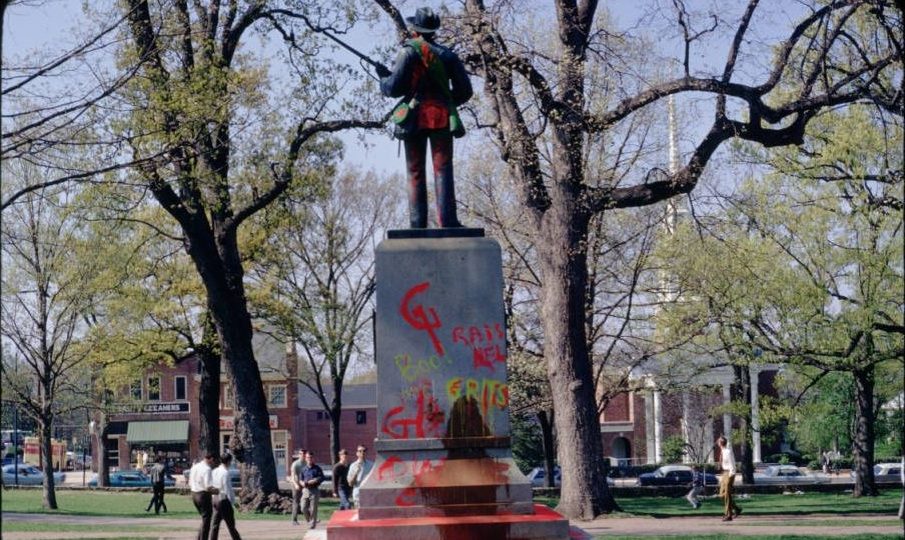 Minna Muhlen-Schulte reflects on the current debate about statues.

As the removal of Confederate statues increases in the wake of Charlottesville, the questions proliferate about public history, the politics of commemoration and our role as professional historians in these debates. What happens when the meaning of a memorial or statue shifts between generations and becomes not only offensive but a symbol of oppression? Do you remove, relocate or reinterpret it? Does it erase history when these statues are removed? On a practical level what happens to the objects – are they destroyed or housed in collections elsewhere? Beyond the United States the push to remove statues has surfaced recently with the Rhodes statue at Oxford University considered by opponents as an unwanted symbol of British imperial legacy in Africa; and locally in Bathurst, N.S.W. where the explorer George Evans looms in bronze over an unnamed Aboriginal man at his knees, in a region where some of the worst of colonial violence was perpetrated. But so far both these statues have been retained.

Amy Greenberg, Professor of American History at Penn State University, supports the removal of Confederate statues but recognises it is “possible to argue that obliterating evidence of ‘bad’ historical events or ‘offensive’ people might in the end be counterproductive, allowing a collective amnesia that the bad events ever happened.” It is also possible that by removing the statue you may lose the opportunity to have a difficult part of history interpreted in a public space and highlight the story the statue occludes. On the other hand, as New Orleans Mayor Mitch Landrieu said, “asking African Americans — or anyone else — to drive by property that they own; occupied by reverential statues of men who fought to destroy the country and deny that person’s humanity seems perverse and absurd.”

When working in Mildura, I realised how the absence of civic markers could also inflict pain. In a series of statues and plaques the town celebrates the more benign figures of the Chaffey brothers, their irrigation scheme and whimsically their innovation of dried fruit. However, there is nothing in the townscape to suggest the world heritage significance of neighbouring Mungo Lake, traditional management of the Murray River for thousands of years and the continuity of Aboriginal cultural life in this community. This was partially rectified by inviting Barkindji artist Badger Bates and other Aboriginal community members to interpret their stories in sculpture and signage along the prominent riverfront precinct.

The life of a monument and its ability to be animated, ignored or reinterpreted was further highlighted by the 1917: Great Strike exhibition at Carriageworks. The City of Sydney commissioned artist Tom Nicholson who imagined a monument for industrial workers and explored the way music and text can mobilise architectural forms that already exist. Nicholson notes the power of ritual in activating monuments, they have the capacity to be the mustering point for a rally or riot as sinister as a Charlottesville. A perfect example is ‘Silent Sam’ at the University of North Carolina, Chapel Hill – a memorial to students who died fighting for the Confederate States Army. In 1967, poet John Beecher “debated” Silent Sam, reading to the statue from his book of poetry To Live and Die in Dixie. In April 1968, following the assassination of Martin Luther King, Jr., the monument was vandalized.  In the early 1970s, the monument was the site of several demonstrations by the Black Student Movement, in 1992 students gathered to protest after Los Angeles police officers were found not guilty in the death of Rodney King and most recently it has become a beacon of graffiti about the Black Lives Matter movement. The mayor is now pushing to remove the statue. But will these events, moments and protests so inextricably linked to Statue also be lost to the campus and create a new silence? Is there a way to re-balance the memorial landscape to engender greater understanding? And perhaps can we as professional historians work with artists to reimagine public spaces that commemorate the complexity of history?

14 thoughts on “Rebalancing the memorial landscape”