Between 1913 and 1917 an army depot was built by the Commonwealth government at Addison Road, Marrickville. Created as a riding school, it was at different times an enlistment, personnel and demobilisation centre; the NSW Leave and Transit depot during WW2; the centre in Sydney for registration by national service recruits during the Vietnam war; and the focus for protests by Save Our Sons. Not only was it one of the army’s major centres in suburban Sydney, a close relationship developed with the Marrickville community that is rare in the history of the army. 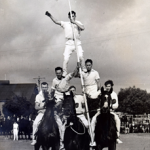 During the 1920s and 1930s gymkhanas at the Marrickville army depot included spectacular and well-remembered acrobatic riding by the 14th Field Brigade; this one is 1938. (Photograph courtesy of Norman Denovan)

In 1976, the depot became the Addison Road Community Centre and home to a collection of migrant, arts and welfare groups.  The army’s whitewashed huts and strict discipline were replaced by a very different ethos and political outlook—in some ways, its very antithesis. Many community centre members had been shaped by anti-conscription protests; some were refugees from war zones. For some time there was unease about recognising the site’s past as an army depot, or becoming the guardians of a history with the army’s conservative and militaristic overtones. ‘Historical’ was a word most often used when talking about leaking rooves, a soggy car park and the tangle of phone lines that made technicians weep.

That was not true for visitors. Elderly people often turned up at the main office wanting to talk about their army days. Some visitors were caught off guard, like the courier who came to my office to pick up some papers and was thunderstruck: the last time he had been here he was 20 years old and a national service recruit during the Vietnam War. The centre was also a powerful place of memory.

Recognition of that role has depended on a sympathetic administration. After a turbulent period of internal dispute, some came to see the centre’s history as a way to rebuild and solidify its identity. Archival research and some earlier oral history interviews had helped establish the heritage and significance of the site. With this material the Centre developed its Living Museums strategy: a series of projects involving signage, an oral history project and the ‘Tails from the Past’ event.

Ambivalence has been replaced by a new curiosity about the galvanised iron huts and the horses, and with a developing appreciation of the site’s significance.

While the re-enactment by the Light Horse Brigade was the key attraction on Saturday, another feature of the day was the screening of a video called the ‘Addison Road Talking History Project’. Developed from the materials collected during the oral history project in 2014, it was structured around each of the eleven people interviewed, using extracts from their recordings with photographs they had either donated or that were taken on the day of the interview or collected during the archival research. Music came from an online production library. Last week’s viewers enjoyed the video. It made the stories captured by the oral history recordings accessible.

The project also demonstrates how historians can make their own documentaries. Some call it digital storytelling, which confines itself to short forms of two to three minutes long. But the technology now available on your computer can be used for a program of any length. It needs a combination of skills: sound mixing with Audacity, Photoshop for images and a digital image editor for constructing the documentary. Program length is limited only by facility: the ‘Addison Road Talking History Project’ video was 16 minutes long

Much of the discussion about media (see the previous post, Thoughts on the Anzac Centenary) has been conducted by historians looking in from the sidelines on a highly technical production process from which they are largely removed. It need not be so..   The technology needed is now being taught in schools so it will not be long before a new generation of historians use digital media as easily as they once used the biro. Once historians jump in, try their hand and sit with viewers to watch the program they’ve created, it will hopefully prompt a more complex discussion about form, audience and history.

For those wanting an introduction to digital storytelling, Oral History NSW is conducting a workshop ‘Oral History and Digital Narrative’ on 27 June. For details see: