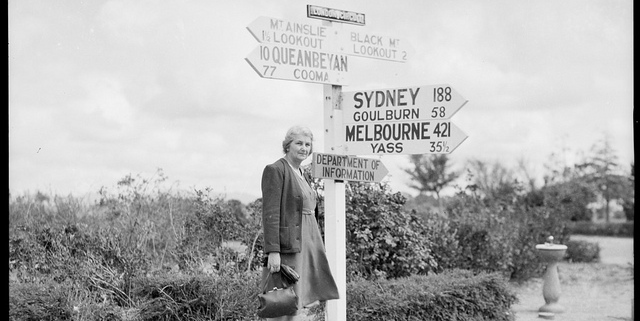 The PHA (NSW & ACT) held a ‘Speeding Through History’ event in Canberra on Saturday 30 May 2015. This was one of our Pearl Anniversary 1985-2015 events. It was well attended by a diverse group of public historians working in the ACT and south-eastern NSW. Participants each had eight minutes to talk about their recent work, without any aids such as PowerPoint, just their natural voice and body language.

Some of the themes that emerged from the talks revolved around networks, interpretation, politics in history, and types of records and evidence including the environment. But the one theme that really caught my attention was ‘myth busting’. It struck me that, by the nature of much of the work we do, public historians make great use of primary or original sources, including non-paper sources such as buildings and landscapes; interviews and other very recent records that have yet to reach the archives. One consequence of this is that public historians scrutinise long-held (or even very recent) stories or ‘myths’, which are often accepted at face value. Such scrutiny often reveals a story to be inaccurate, misleading or just plain wrong. Public historians, therefore, tend to challenge such myths — perhaps more than their counterparts in other areas of history – and sometimes suffer under the gaze of disbelievers or vested interests.

However, it also occurred to me that we need to be sensitive when dealing with myths and legends.  Some years ago, I wrote in a review of a local history:

The essay titled ‘Legends’ describes a number of local legends, … and then debunks these legends. Unfortunately, no account is taken of the roles that myths and legends play in a community. Legends are not about the literal truth, but are metaphors for the values of a community. They symbolise what can’t be possessed, but which needs to be striven for. Founding myths are especially potent. Across all the stories quoted run the strands of daring-do, of bravado, of escaping injustice, of sublime awe – the very characteristics attributed to the Australian bushman in the late colonial period when important national legends were being formed. That Blackheath is so rich in such myths from the time of the 1880s foundation of the new village in the wild mountain tops surely deserves better that the attribution of base motives such as enhancing local intrigue for financial gain. (https://sepiagreen.wordpress.com )

Another presenter the Canberra event made a call for ‘no more passive tense’ in our historical writing. I couldn’t agree more: the clearer our history, the more it is likely to resonate with the public.

My thanks to Anne Claoue-Long and Michelle Richmond for all their work in organizing the event, and to GML Heritage for their sponsorship which included the use of their fabulous offices in the Ancher, Mortlock & Woolley designed RAIA HQ in Red Hill.  The office was built in 1967, in a Canberra adaptation of the Sydney Regional style, and is listed on the ACT Heritage Register.

1 thought on “Speeding Through History (and myths and legends)”