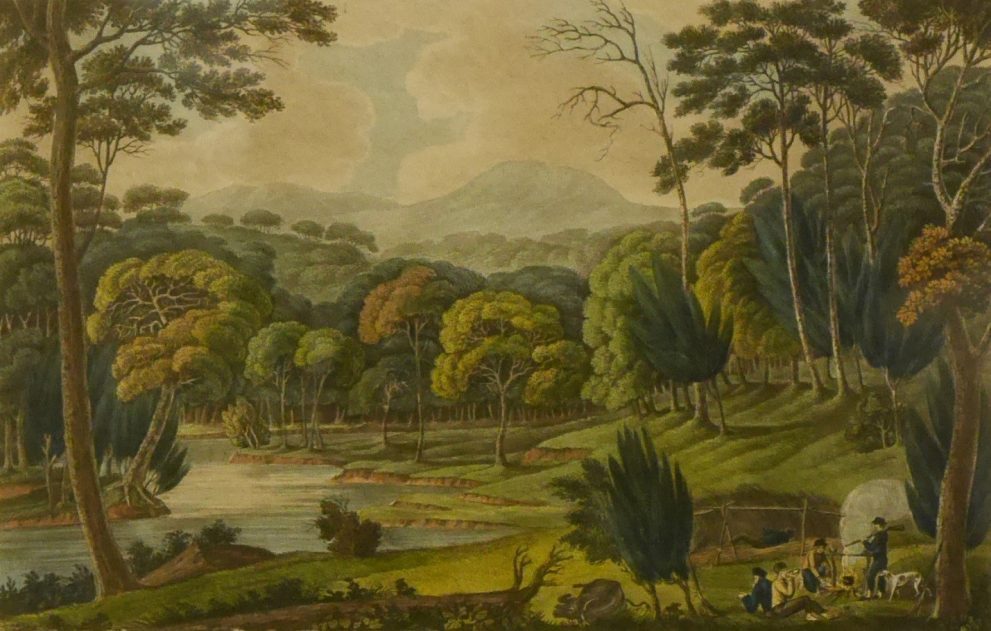 … Ruth Banfield reports on an exploration of the history of Macarthur.

They Came By Boat is an exhibition [until 15 October] that explores the incredible journey convicts, free settlers and, in current times, refugees, faced when leaving their homeland and arriving in a new and foreign country.

The exhibition features a range of works from Campbelltown City Council’s permanent collection, along with loans from the Campbelltown and Airds Historical Society and the Art Gallery of New South Wales Research Library. Taking the form of portraits, landscapes and illustrations, it was my goal as the curator of this exhibition, to select works that would showcase the Macarthur region from a historical perspective.

The portraits depict many historic figures and families from the Macarthur region, including the Scarr family, Samuel Bradshaw, Arthur Wilmore and the Edrop family.  Artists include Joseph Backler, Joseph Lycett, Thomas Kirby and Gracius Broinowski.

During a period where art was a tool to both elevate status and possibly gain freedom for those punished under the convict regime, these works bring into focus early settler families from Europe. These families journeyed over oceans, arriving in Australia and eventually settling in what is now known as Macarthur. The art shows the houses they built and the landscape they inhabited. The scientific illustrations explore wildlife from Wedderburn and sublime landscapes, juxtaposed with nineteenth century portraits of society figures.

On the lands of the Dharawal nation, the area now known as Macarthur was initially surveyed in 1857; earlier it had been known as the Cowpastures. Attention was drawn to the region in the late eighteenth century after a myth had circulated about the colony of a small herd of cattle living in the area. Determined to find this elusive herd, Governor Hunter explored the area, finding the cattle in 1795. The animals are depicted in a significant early rock painting in what is now Kentlyn, near Peter Meadows Creek, which survives as the oldest-known Indigenous record of colonisation. This event marked the beginning of white settlement within the region.

In 1805, wool pioneer John Macarthur was controversially granted 5,000 acres of land to raise Merino sheep on a prime grazing area near the Nepean River. This fine wool would be exported back to British factories.

This work, by an unknown artist was based on a work by engraver Joseph Selleny. Selleny was born in Meidling, Vienna on 2 February 1824 and arrived in Sydney on the 5 November 1858 on the Novara.  He was brought on board to illustrate the local surroundings. This image was published in a book titled Narrative of the circumnavigation of the globe by the Austrian frigate Novara. In a very rare type of acquisition, this image, a loose leaf separated from the original book, was presented as a gift by the Friends of Campbelltown Arts Centre.

Also on display is a copy of Gracius Broinowski’s six-volume series, Birds of Australia, published between 1889 and 1891. This series made a significant contribution to the understanding and conservation of the Australian wildlife as no other local artist had attempted such a feat.

They Came By Boat offers an idealised view of Australia as depicted by artists for reasons almost like an early form of marketing, with the intention of drawing more people into the colony and show the perceived progress of the empire’s rule. As before, many nationalities and migrants still make their way to the area which has become a rich, diverse and flourishing community, known as South West Sydney.

The Campbelltown Arts Centre is open every day  from 10am to 4pm with free entry. Its address:
1 Art Gallery Road
Campbelltown NSW 2560