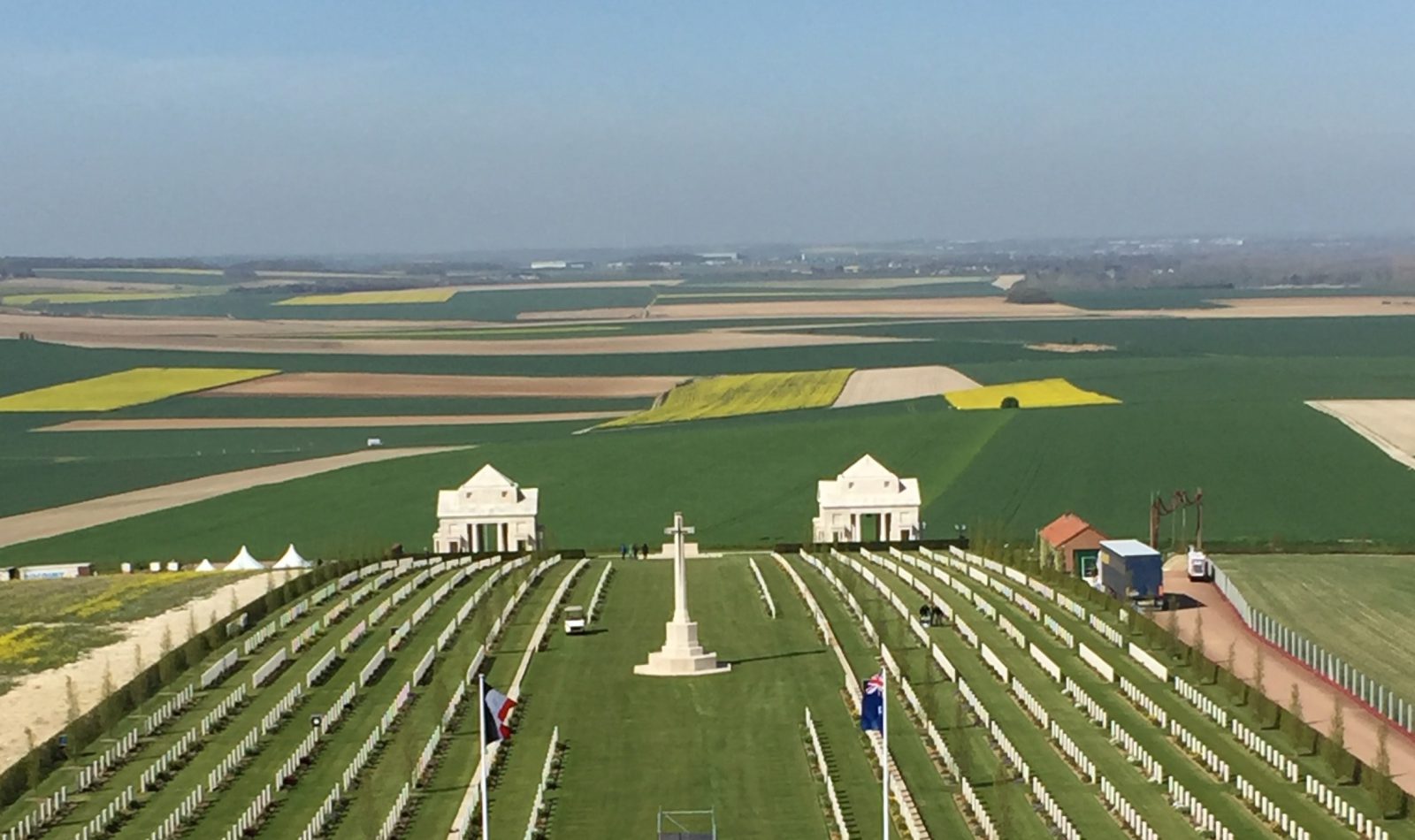 ‘War commemoration is now a modern industry tied to family, nation and the emotional life, and Villers-Bretonneux is a measure of its cosmopolitanism. Small parts of the world belong to Australia by dint of commemorative grant, by blood, by graveyards.’ So writes The Australian’s editor-at-large Paul Kelly ahead of the centenary of the battle of Villers-Bretonneux. It is estimated 8000 people will attend this year’s dawn service on 25 April 2018 at the Australian National Memorial situated next to the Villers-Bretonneux Military Cemetery in France. Tours from Australia are booked out for the last Anzac Day  of  the centenary commemorations and the opening of the Sir John Monash Centre by Prime Minister Turnbull. The centre was his predecessor’s idea. Mr Abbott wanted, Kelly says, ‘to revive the historical memory of the Western Front as the greatest focus of human sacrifice and military achievement in our history’.

What happened a hundred years ago? In April 1918, Australian units helped defend Villers-Bretonneux from a German onslaught. At dawn on 24 April the Germans attacked and captured the town. Leading the British counter attack, the Australian 13 and 15 Brigades enveloped the town and successfully cleared it of Germans on 25 April, the third anniversary of the Anzac landings at Gallipoli. This action effectively ended the German offensive.

To keep the historical memory alive, the Sir John Monash Centre tells Australia’s story of the Western Front in the words of those who served:

This cutting-edge multimedia centre reveals the Australian Western Front experience through a series of interactive media installations and immersive experiences. The SJMC App, downloaded on each visitor’s personal mobile device, acts as a ‘virtual tour guide’ over the Villers-Bretonneux Military Cemetery, the Australian National Memorial and the Sir John Monash Centre.

The experience is designed so visitors gain a better understanding of the journey of ordinary Australians — told in their own voices through letters, diaries and life-size images — and connect with the places they fought and died. A visit to the Sir John Monash Centre will be a moving experience that leaves a lasting impression.

In principle this sounds good but we do need to ask the question whether the $99-million price tag can be justified at a time when at home national institutions like the National Library and National Archives have faced years of budget cuts. Moreover, some historians have questioned the quality of the historical interpretation. Professor Bruce Scates​, who will be giving the keynote address at this year’s PHA conference, Marking Time (see below), resigned from being a consultant on the project because he was worried the centre would convey too warm and fuzzy a picture of the war. A complete picture would also need to include dissenters like Arthur Rae. Rae was a Labor politician who lost two of three sons to the war. One, Billy, is buried at Villers-Bretonneux, under the lament ‘for what’. Rae had argued bitterly against Australia’s participation in the conflict and plans for conscription at home, only to be branded a traitor, tearing the family apart.

Nostalgia and commemoration instead of history is a recurring theme in the debate about what Anzac Day means and how war should be remembered. On our blog, in 2015 Caroline Adams  a member of the PHA South Australia suggested professional historians could offer insightful and contextualised accounts of history, which offered more than ‘digger stories’ and ‘nursing angels’. And last year, PHA NSW member Ian Willis wrote about the contested nature of Anzac:

Anzac is a fusion of cultural processes over many decades and it has been grown into something bigger than itself.

In August this year, professional historians will reflect further on the four-year-long commemoration of World War I at our biennial conference. Marking Time will be held at the NSW State Library on 30 and 31 August. The conference will also explore the changing ways in which we mark time and interpret events through tradition and new media in the 21st century. The call for papers is now closed. Successful paper givers will be notified by the end of April. The full program will be available from the middle of May

2 thoughts on “Anzac Day 2018: the final year of the WWI centenary commemorations”