‘Get to know your neighbourhood – you could be in for some surprises!’ says PHA member Katherine Knight, after picking up one of the volumes in the Kingsclear Books Pictorial History Series. A number of PHA members, including myself, have written for Kingsclear about particular localities, regions or local government areas. My contribution to this ongoing project was to write the text for Camden and District. 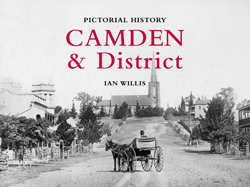 The Camden district is a constructed concept. It refers to a cultural region that developed from the settlement of the private village of Camden on the Macarthur family estate of Camden Park in 1840. As the town’s stature as a regional hub increased over the next century so too did the district around it.

But the Camden district does not show up on any administrative document. It is a compilation of the economic, social, political and administrative activities of a host of people and organisations. Using oral and written sources I constructed the map of this cultural district during my MA (Hons) in Australian History at the University of Wollongong in the early 1990s. I am pleased to say that my creation has survived research into many dark corners of the areas local history.

Maps are an under-utilised tool by historians. They are helpful in reconstructing a past sense of regional identity, which can give additional context for stories of place and landscape. 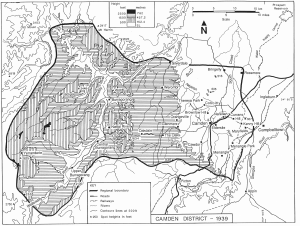 The Kingsclear Books Pictorial History Series includes 35 titles produced over the last 33 years. Each title has a collection of black and white images. The photograph is a snapshot of the past and a view into the soul of a locality. In Camden and District one image of a local Edwardian family on the first floor verandah of their general store, dressed in their Sunday best, illustrates a tender scene in their busy lives in the town. The Whiteman family were local identities. Many of their descendants still live in the area. These images trigger many memories about family celebrations, commemorations and other events.

Memories make a powerful emotional connection to place. The medical profession uses them as a healing mechanism for communities that have suffered massive trauma, such as bushfires. A collection of images such as the Kingsclear series offers can have the same effect. I was told of one such story in Camden.

A friend gave a copy of Camden and District to a local elderly woman suffering from dementia. The woman is a member of a prominent Camden family with connections to the colonial period. She grew up during the Interwar period on the family farm. One of the images from the time of her youth is of her family’s prize-winning cow at the Camden Show, for over 100 years one of the most important rural festivals in the local area. She recognised the cow and recalled winning the sash. My friend told me the woman holds onto the book in her waking hours as if were a most precious item. It brings back memories of a better time in her life that evoked hope and happiness.

Other readers of Camden and District have welcomed its coverage of the local community’s contribution to the cultural region in the post-war period. Much of the history of Camden had hitherto concentrated on the colonial period and the Macarthur story. As important as this is in the Australian narrative of national building, it ignores the host of other stories that have swirled around it. The local story has many levels, many paths and many layers, including those of more recent decades.