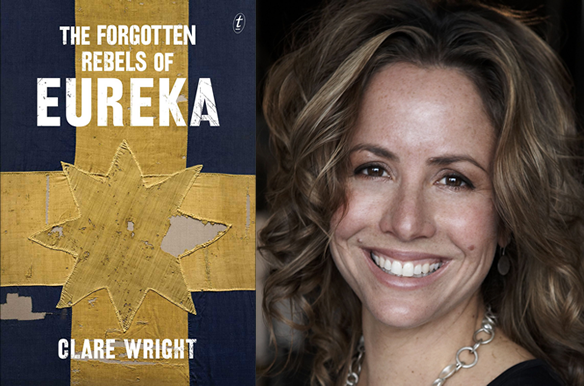 Professional historian, Clare Wright, has won the 2014 Stella Prize for women’s writing. Selected from a strong shortlist which included both fiction and non-fiction, Wright won $50,000 for her history of the Ballarat goldfields, The Forgotten Rebels of Eureka.

In her citation, Kerryn Goldsworthy, chair of the 2014 Stella Prize judging panel, said:

A rare combination of true scholarship with a warmly engaging narrative voice, along with a wealth of detail about individual characters and daily life on the goldfields, makes this book compulsively readable. It has a highly visual, almost cinematic quality, with vivid snapshots and pen-portraits of goldfields life.

Her frank and lively style of storytelling makes her material accessible without sacrificing either the scholarly accuracy of her account, the depth of its detail, or the complexity of its ideas.

The Forgotten Rebels takes a close look at the people on the Ballarat goldfields around the time of the Eureka Stockade rebellion. This history is well known to Australians who learn about it at school. However, Wright challenges the traditional history which focuses on the men of the goldfields by revealing the large numbers of women who were living and working there. Some of these women wielded great influence. Women were owners and operators of significant businesses on the goldfields such as shops and pubs. A woman who owned a theatre in Ballarat was the largest donor of funds to the miners’ cause. Wright finds evidence that a woman was the sole editor of the influential Ballarat Times during a crucial period during the agitation.

In writing the women back into this history Wright does not ignore the men. Wright is able to portray men’s lives in richer detail because she includes their wives and other women in the narrative. The people on the goldfields become alive through her writing and research. The book-buying public has responded well to Wright’s innovative presentation of this iconic episode in Australia’s history. Even before the award the book went into reprint due to strong sales.

Clare Wright, like many professional historians, is passionate about sharing well-researched history with the public. It is wonderful to see her work receiving such accolades.

Much has been written about Clare Wright and the Forgotten Rebels of Eureka. The following links may be of particular interest to historians: