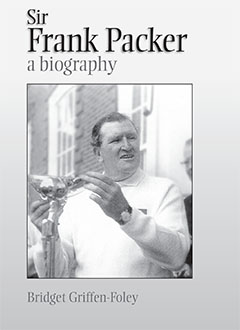 Since Kerry Packer’s death on Boxing Day, 2005, his family, and that of the Murdochs, have been ripe for nostalgic embrace. Three dramatic mini-series focused on the Packer empire: Paper Giants: The Birth of Cleo (on the ABC in 2011), Howzat! The Kerry Packer War (Nine, 2012) and Paper Giants: Magazine Wars (ABC, 2013). Then, late last year, came Power Games: The Packer-Murdoch War, with the two dynasties going head-to-head. Power Games aired on Nine, the network Sir Frank Packer himself established, and his grandson James sold. The mini-series focused on 1960 to 1975, based in part on the second half of my Frank Packer biography. Lachy Hulme (who played Kerry Packer in Howzat!) delivered a compelling, uncanny performance as Kerry’s father.

Power Games provided the impetus for a new edition of my biography of Sir Frank Packer. In my foreword, I reflect on what has happened to the Packer family since the biography first appeared in 2000. Not only has Kerry died, but also a key informant for my research – Sir Frank’s sister, Lady (Kathleen) Stening – along with two others, Clyde Packer (Sir Frank’s elder son) and Lady (Florence) Packer (Sir Frank’s second wife).

By 2000, I was aware of a rumour that Sir Frank’s father, Robert Clyde Packer, had sired another son. Ernestine Hemmings, who had been working as a sub-editor at Smith’s Weekly, where R. C. Packer was manager, had given birth to a son, Robert, on 30 October 1924 in Hobart, where Packer had spent his early life. Unmarried, Ernestine had assumed the surname Hill. There were no official records to prove the paternity of Robert Hill, whose birth was unregistered. However, Hill believed that Packer was his father, and there is mounting circumstantial evidence that this was the case. The full story of journalist and travel writer Ernestine Hill and her son Robert, who has recently died, awaits her biographer. As I explain in the foreword, Sir Frank Packer: A Biography must now be read in the context of a likely relationship between R. C. Packer and Ernestine Hill.

Since Kerry’s death, the Packer family has all but vacated its print and free-to-air television assets and transformed itself into a gaming and entertainment business.The Packers and the Murdochs, together with their wives, girlfriends and offspring, have become celebrities – usually (but not invariably) reluctant products of the media their families helped to create and control for most of the twentieth-century. They still have the power to fascinate, as demonstrated by the extraordinary interest in the recent brawl between James Packer and David Gyngell.

The infamous confrontation between Clyde and Kerry Packer and Francis James and Murdoch forces at the Anglican printery in 1960 was depicted in Power Games. I now fantasise about a prequel to Power Games, one that would include the fisticuffs between Frank Packer and Ezra Norton at Randwick Racecourse in 1939.

What would Sir Frank think of all this? Find out on Twitter, for he has made a comeback there, too: @Sir_FrankPacker.

2 thoughts on “Back to the Packers”