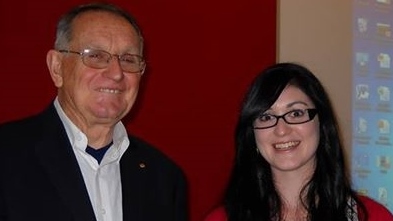 The photo shows one of the prize winners,  Sarah Gregory, with judge Bruce Pennay at the 2013 History in July in Sydney.

Laila Ellmoos, PHA NSW President and Bruce Pennay, OAM report on the 2012 public history prize, a prize introduced by the PHA NSW five years ago to recognise and reward the work done by undergraduate history students enrolled at universities in NSW and the ACT whose projects engage with the profession and practice of public history.

This year we received nine entries for the prize. Our judge was PHA NSW member, Dr Bruce Pennay, Adjunct Associate Professor at Charles Sturt University and author of commissioned histories and heritage reports, which often focus on the Albury-Wodonga border district where he lives.

Bruce recommended that two applicants share the Public History Prize for 2012: Sarah Gregory from Macquarie University and Brett Seymour from the University of Sydney. Because there were two winners, Bruce generously waived his judging fee and made a personal donation to augment the prize money.

In his judge’s report, Bruce stated that both applicants were exemplary in their use of original source materials and their contextual interpretation of the past.

Sarah considers carefully a range of circumstances that bear on the two testimonies to help explain their similarities and differences. She analyses how each brother structured his storytelling and makes a careful inquiry into their story making. The author is sensitive to issues of historical imagination, sympathy and understanding: she has approached thoughtfully the difficult task of dealing with a witness’s feelings of guilt. The essay is a well-constructed and insightful account of two holocaust experiences.

Brett Seymour’s essay, ‘Robben Island: Histories, identities and futures’, is a critical analysis of debates over the meanings and memories being imposed on Robben Island. The author explains how Robben Island has become a museum, national monument and World Heritage site on the basis of its use as a prison for anti-apartheid activists, most notably Nelson Mandela.

Brett examines the problem of how an official, public memorialisation of importance to South African nation-building tends to overwhelm other individual or collective memories of place: the island has a long, multi-layered history. In examining the simple branding of a rhetorical space, the author raises issues about assessing heritage value. Brett provides a thoughtful discussion of what is often the complexity of place-based heritage and the problems that arise for management, presentation and conservation.

Congratulations to the winners, whose essays can be found at http://www.phansw.org.au/publications/undergraduate-essays/