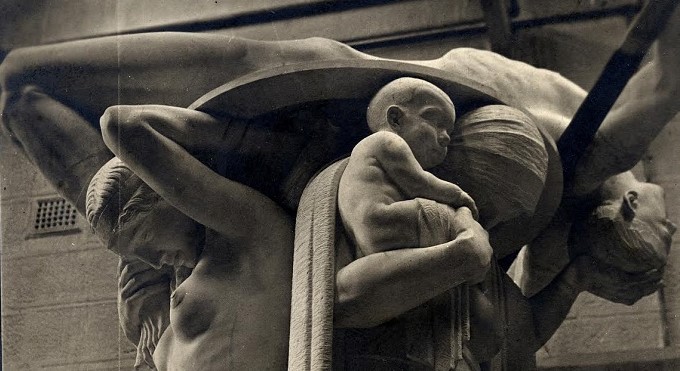 Exactly one hundred years ago, Rayner Hoff was in France, serving in the British Army in the Great War. Eighty years ago, in 1937, he died in Australia, aged 42, at the height of his career as a respected and accomplished sculptor.

As the Anzac Commemoration Service takes place this year, I wonder how many people will look up at the sculptures made by Hoff on the Memorial in Hyde Park and reflect on the artist who made them. Not many I expect, although his sculpture at the centre of the Memorial, Sacrifice, is often described as one of the greatest pieces of sculpture in Australia.

Hoff was born on the Isle of Man in 1894, and spent the first 28 years of his life in the United Kingdom and Europe.  After studying at Nottingham School of Art, he enlisted in the British Army in December 1915. Although Hoff did not see any active service himself, he saw the results of the terrible slaughter of trench warfare. These images stayed with him all his life, and he drew on them in his later work in Australia.

Fortunately his skills as a draughtsman saw him transferred to a topographical survey unit of the Royal Engineers in 1917, where he made maps from aerial photos for the remainder of the war. After over three years in France, Hoff continued his studies at the Royal College of Art in London. He moved to Australia with his wife and daughter in 1923 to take up a teaching position at East Sydney Technical College, now the National Art School. It was in Sydney that he made his name in the art world.

Hoff’s outstanding skill as a sculptor resulted in commissions for sculptures for three war memorials in Australia. The first was in Dubbo, completed in 1925. The second, the much admired National War Memorial in Adelaide, has been the site of the Anzac Dawn Service since it opened in 1931.

Hoff’s third commission, the Anzac War Memorial in Hyde Park, Sydney, was unveiled in a grand ceremony attended by 100,000 people in November 1934. It is now the site of the main Commemoration Service of Anzac Day in Sydney, held after the Dawn Service at the Cenotaph in Martin Place and the Anzac Day march.

It is not only on Anzac Day that Hoff’s sculpture is viewed. Every day at 11 am at the Anzac War Memorial, visitors and staff stop for a minute of silence. They are asked to stand and face the sculpture Sacrifice in the centre of the Memorial, while a Service of Remembrance takes place. Over many years, thousands have stood contemplating this now iconic sculpture while remembering the many who sacrificed their lives at war.

The Anzac Memorial was designed by architect Bruce Dellit in the shape of an Art Deco ziggurat. Hoff worked closely with Dellit on the design and on the placement of the sculptures. The exterior sculptures include sixteen seated and four standing figures, four cast stone reliefs and two ten-metre-long bronze reliefs. Inside, as well as Sacrifice, marble relief sculptures line the walls.

Making these 37 sculptures was an enormous task. Hoff had a private studio at the National Art School, which proved to be the ideal site for the construction of the external sculptures, although in 1930 it had to be massively enlarged to cope with the commission. With a substantial stipend provided to complete the work, Hoff was able to pay eight of his students for three years during the Depression and employ other staff members to work on the memorial sculptures.

Sadly, he did not live to see many of the Anzac Memorial services held at the building. He was surfing at Bondi when he collapsed in November 1937. He died two days later after a severe attack of pancreatitis in Delaware private hospital in Waverley, only three years after completing the Memorial. Hoff’s tragic death meant that Australia lost one of its most visionary artists and teachers, but the sculptures on the Memorial stand as a tribute to his extraordinary talent.

Deborah Beck’s book Rayner Hoff: the life of a sculptor (NewSouth Publishing) was launched by Barry Humphries in Hoff’s former studio at the National Art School on 9 March 2017.