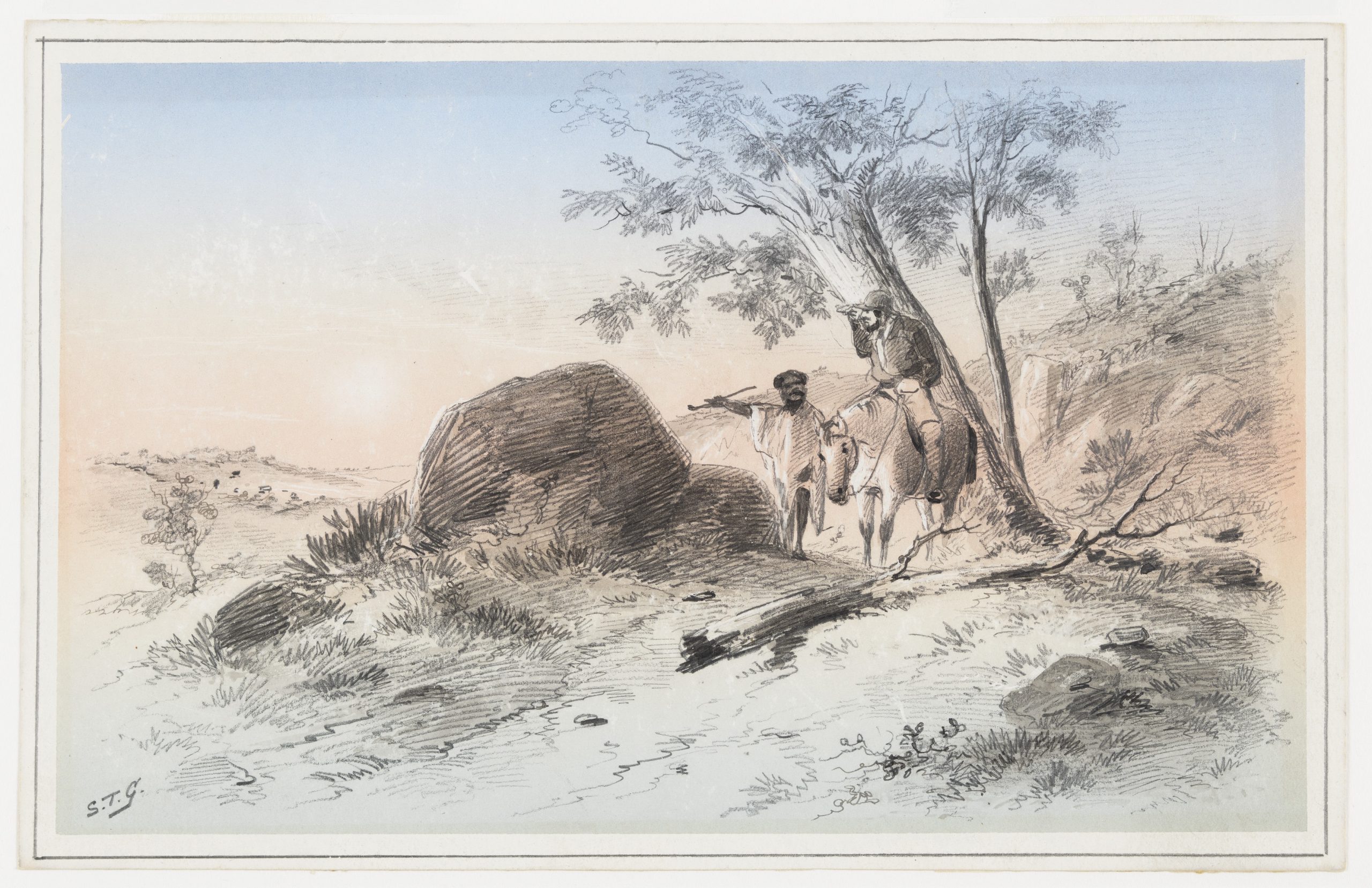 The Sydney Wars, as its title suggests, brings under a single conceptual umbrella the conflicts between Aboriginal peoples of the Cumberland Plain and the British colonists. It spans  thirty years from the arrival of the First Fleet. Both the lens of war, and the geographical unit of the Cumberland Plain, yield a distinctive new view of this history as Eora, Dharug, Gandangarra, Dharawal and Darkinjung groups made complex patterns of movement both into and away from settlements the British pushed out across the region. Gapps writes as a historian with a particular interest in, and understanding of, military history. He pays attention to the integral role of military thinking in the British approach to the NSW colony, the evolving strategies of the Aboriginal groups he terms collectively ‘the Sydney people’, and a close attention to the detail of war-on-foot.

In his epilogue, Gapps wonders why it has taken so long for someone to write this history. He places part of the blame on other historians, who have become embroiled in histories of cross-cultural encounters, and entangled with the concept of inevitability. He implies that had more historians been attuned to military history, a more direct connection could have been made between the resistance histories of the 1970s and 1980s and a thoroughgoing history of the Sydney wars. As a somewhat entangled ‘cultural historian’ myself, my understanding is that historians of the past 30 or 40 years have at least partly wanted to question the powerful narrative that the setting of Phillip’s foot on shore here would lead to the British domination of the entire continent. In order to do so, historians have undertaken to re-assess Sydney entirely as an experiment that might have had different results, and thereby to reinstate a sense of historical contingency in the story of the founding of Australia’s first colony. Inga Clendinnen’s Dancing with Strangers (2003) was perhaps the high point in asking the question:  ‘If we assume nothing and start again, could we imagine that a different history might have stemmed from Sydney Cove?’ One of the costs of this approach has  been an inclination to imagine the period as a kind of neutral zone, in which British domination had not yet gained a foothold, and each ‘encounter’ between Aboriginal people and the colonists could be reappraised, in an extended first encounter.

Gapps’ undertaking shows that this is to miss a quadrant of the landscape – though I do believe that his kind of military history would not have been possible without re-establishing a sense of contingency;  indeed it illustrates another face of that very contingency. The Sydney Wars is no resistance history. Rather, it is a squarely empirical, closely descriptive chronological account of the period, drawn predominantly from first-hand accounts. One of its achievements is to reassert the ‘Sydney wars’ as a conflict over presence, land, resources (involving and exacerbated by sexual violence towards women), rather than a ‘cultural collision’.

As Gapps shows, the British presence was a military presence from the outset. The units and their officers had experience in a range of wars from India, Africa and the Americas, and he emphasises that they were not unfamiliar with guerrilla warfare or unwilling to adopt guerrilla tactics at times. The colony at Sydney Cove was set up with defence in mind (from the French, from insurrection and from the native population). Gapps’ close narrative of the period shows that if we presume a militarised setting, many aspects of the colony carry a different inflection. Historians have had their ears trained to the varied ‘encounters’ between colonists and Sydney’s Aboriginal people, especially over the first twelve-to-eighteen months after the First Fleet’s arrival, often trying to gauge how friendly or hostile they might have been. In Gapps’ history all these encounters become edgy, cordial, unexpected episodes within a militarised context. Gapps draws the reader into an understanding of the importance of these meetings, movements and displays as military performance – formations, handling of weaponry and demonstrations of power on both sides. The British arrived with their red coats and muskets. The Sydney people too were experienced in war and were ready to show their power to the colonists. At the same time, the Sydney people began to pick off unarmed individuals venturing out from the colony, instilling fear, making the hinterland dangerous and displaying mastery of their Country.

The Sydney Wars very effectively illustrates how understandings of military conduct penetrated, and bound together, colonial society. The Marines, then the NSW Corps shared aspects of military knowledge with decommissioned privates who were settling in the colonyand with the many convicts and settlers who had some military experience. Gapps also demonstrates how their efforts were bound together by the instructions of the Governors, who  used both military and paramilitary resources to keep watch, carry arms and at times undertake aggressive manoeuvres. As other reviewers have observed, one of the most interesting lights this history casts is on the distinctions usually drawn between the military proper in the colony, and everyone else – in Gapps’ history even ‘misconduct’ by settlers or convicts bearing arms is integrated into the military framework, understood by colonial government to be a necessary part of the wars.

Gapps is keen to pursue a military history throughout, though at times he acknowledges there was tension between military imperatives and economic logic, for example in the establishment of colonists along the Hawkesbury. Although the narrative strains under this pursuit at times, his determined focus highlights the ways in which the placement of colonists in outlying areas and their land clearing activities, were closely linked with the military effort as well as food growing. Much more importantly, it foregrounds the actions of the Sydney people in raiding or destroying crops and dispersing stock around the main settlements as well as isolated outposts, across the period. ‘Economic sabotage’, Gapp’s argues, was a central and highly successful part of the Sydney people’s war, as it has been in guerrilla warfare before and since.

The Sydney Wars throws a different light on the on-again off-again nature of the conflicts, conceiving them as episodes in a regional war. Darkinjung and Dharug people moving in and out of the Hawkesbury settlements, for example, while Hunter issued oscillating instructions to colonists about whether it would be ‘misconduct’ to engage in hostile action, or not to engage, become in this history not questions about the nature of British intentions, or consistency in Aboriginal policy, but a flip-flopping of strategies based on circumstances. The question of whether to exercise hostility or civility in this framework was perhaps not unlike the awkward question of whether Britain was at war or under truce with France if one happened on a ship when no instructions had been received recently. One of The Sydney Wars’ most powerful observations is that the Sydney people were in a situation of both surviving and supporting guerrilla warfare for three decades. Living ‘inside’ or ‘outside’ the settlements, notwithstanding mutually beneficial relations with some of the colonists, men, women and children lived with the strain of war. Gapps’ history, in having brought together these Sydney wars, which have until now been understood as a series of isolated or recurring ‘conflicts’, may provide a key to more fully understanding what this was like.

As Penny Russell (Sydney Morning Herald, 22 June 2018) and Ben Silverstein (Dictionary of Sydney, 25 July 2018) note the impact of Gapps’ history on historians’ and the public and popular view of early years of the NSW colony will take time to unfold. Gapps does not take us down this road himself. He concentrates on re-appraising the sources and providing an – often distinctive – account of the action. This approach prevents overdetermination of the meaning of events that have been so intensively examined over the past few decades for their moral tone – good/bad, strong/weak, noble/corrupt – but also leaves us to work out what happens next, because, like it or not, there are moral implications to how we understand this history.

Gapps’ himself closes in a commemorative mode, offering a roll of honour for casualties on both sides of the Sydney wars so that they can be contemplated, and remembered.

Stephen Gapps will be speaking at the PHA’s Marking Time conference on Friday 31 August. He is on a panel called,Entangled histories: indigenous wars, military and shared spaces.