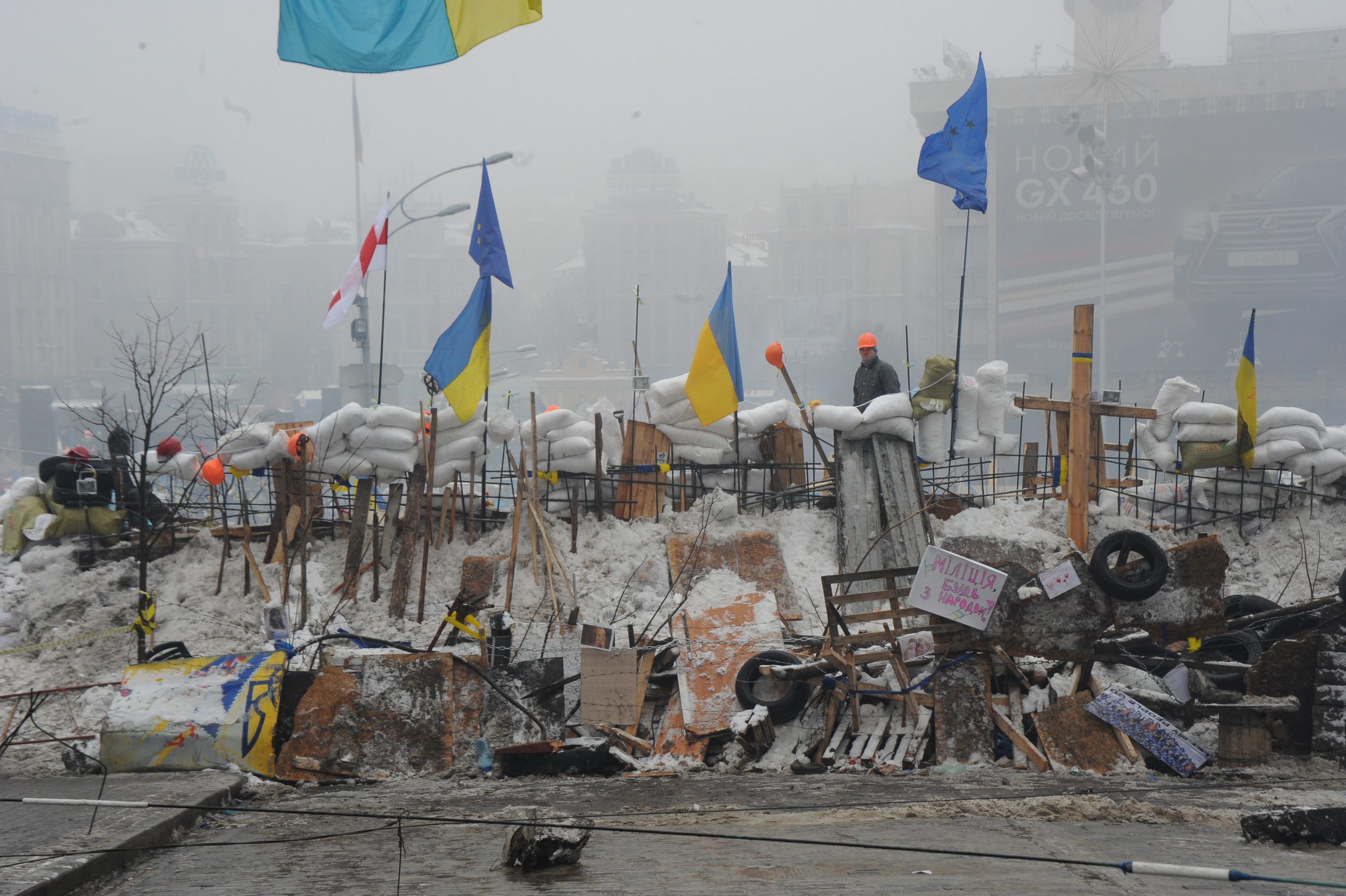 On a chilly evening in late November, 2013, hundreds of thousands of Ukrainians converged on the Maidan Nezalezhnosti—the Independence Square—in the centre of Kyiv to protest the unpopular regime of Viktor Yanukovych. In the wake of a rejected Association Agreement with the EU, the protestors—of many different languages, cultures and religions—demanded the freedom to determine their future. The protest, as well as the inevitable government response, was very public—broadcast on social networks, on internet news channels, on televisions and tablets around the world. In the turbulent months that followed, the spirit of Maidan shifted focus, as Ukraine suffered a revolution in February, the illegal annexation of Crimea by Russia in March, and an ongoing Russian-backed insurgency that, since April, has claimed thousands of lives and displaced nearly a million people. The Ukrainian people now attempt to exercise their right to self-determination under the present threat of their political annihilation.

The tumultuous events of 2014 have uncovered many issues dominating Ukraine’s twentieth century. Amongst these, the Ukrainian people’s right to self-determination looms large. This right is not without its problems; in legal discourse there is no consensus over whether nations have the right to self-determination, or if it is merely a principle with no legal effect. The entire notion is weighed down in Latin maxims, and despite being a human right enshrined in numerous UN treaties and international agreements, thousands of nations around the world exist without a state. In the century preceding independence in 1991, Ukraine was an autonomous state for less than ten years, in 1917-1921 and briefly during the Second World War. This statelessness created in dissidents a fierce desire to safeguard the Ukrainian nation, to preserve the Ukrainian language, as well as the hope to see an independent Ukraine exist again in Europe. The foundations of the Maidan movement, in spirit, were constructed on the dissident movement in Soviet Ukraine. The Ukrainian Helsinki Group is one such collection of dissidents who were inspired to act by concerns over the future of their people.

Thirty-seven years before the first Maidan protests, nine intellectuals gathered in a leafy suburb in Kyiv to defend the right of the Ukrainian people to self-determination. Together, on 9 November, 1976, they signed into existence the Ukrainian Public Group to Promote the Implementation of the Helsinki Accords—the Ukrainian Helsinki Group (UHG). The second of several Helsinki Groups to operate in the Soviet Union, the UHG claimed a ‘completely humanitarian task’ – the promotion of the ideals of the Helsinki Final Act, a highly influential human rights document of August 1975, and their incorporation into domestic Soviet law. Aside from the concrete details of circumstance, the only thing differentiating these dissidents from their grandchildren on the Maidan was publicity: their manifestos were distributed not by Twitter, but instead as samizdat—self-published volumes of varying quality, often produced on photocopiers and distributed at great risk of a charge of anti-Soviet agitation.

In the historiography of the end of communism in Eastern Europe, the Helsinki Final Act has attained almost sacred status. For historians like Sarah Snyder and Daniel Thomas, the signing of these Accords put into motion a process—the so-called ‘Helsinki Effect’, a term coined by Thomas—which toppled state socialism from the bottom up. These studies fail to take cognizance of the importance placed by the UHG on self-determination as a right—and, in failing to do so, misrepresent the history of dissent under developed socialism. Although expressed in the language of international law, the right of self-determination that the Helsinki Group advocated was a socialist right—one grounded as much in Article 14 of the Soviet Constitution (1936) as in Article 1 of the Helsinki Final Act. Underpinning this was a demand that the Soviet authorities respect their own laws—a tactic already employed by dissidents in Moscow in the 1960s, but given new weight in the Ukrainian SSR where rights-agitators mixed socialist ideology with the Soviet Union’s adopted international obligations. As the last generation of dissidents before the Soviet Union fractured into the numerous CIS and post-CIS (Georgia, Ukraine) nations of Eurasia, the representatives of the Helsinki Groups across the former USSR were highly influential in achieving independence for their respective republics; in Ukraine, the UHG became the vanguard of independence—a role now assumed, in 2014, by a new generation.

1 thought on “Ukraine and self-determination”