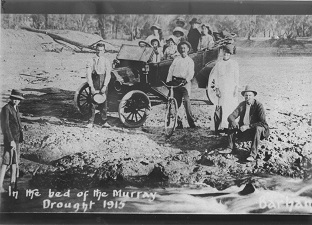 In his lecture, ‘Of Droughts and Flooding Rains – rainfall variability in Australia and its effect on our history’, Dick discussed the impact of Australia’s often extreme weather patterns on our history. Taking a largely chronological approach he began with the arrival of the First Fleet, noting that the short period of ‘wet’ between 1788 and 1789 was followed by the drought period of 1790-1793 – the colony’s ‘hungry years’. Drawing on comments by contemporaries, and what is now understood about Australia’s droughts, Dick looked at the fledgling colony’s response to the 1790 drought. He made particular mention of the construction of the three storage tanks beside the Tank Stream and its subsequent conversion into a storm water channel and latter day tourist destination. Perhaps not surprisingly the responses to the 1790s drought and Federation Drought both focussed on water storage as protection against future dry seasons.

Discussion of the disastrous Federation Drought of 1895-1902 and its effects on agriculture in the Australian colonies included references to the New South Wales Day of Humiliation and Prayer for Rain in NSW on 26 February 1902, when everything closed for the day except the pubs. Dick also discussed Queensland’s 1902 solution to this drought, the Stiger Vortex Cannons. As Dick explained, these were the brainchild of the Queensland Chief Meteorologist Clement Lindley Wragge. Based on an invention he saw in Italy, Wragge created his own Stiger Vortex Cannons which were supposedly able to bring rain from the clouds by explosions in the air. The guns were test fired at Charleville on 26 September 1902, without success. Two of the cannons are still on display in the town.

The Federation Drought broke in 1903. Government efforts turned to drought proofing the country, beginning with dam construction. Drought returned to Australia in 1914 and 1915. Termed ‘Fisher’s Little Drought’ because of Andrew Fisher’s efforts to minimise its effects, it eventually resulted in drought relief legislation. Dick went on to look at the impact of later droughts, in particular the 1983 Ash Wednesday Fires.

Investigations of Australia’s floods, including the 1955 Maitland floods and the Queensland floods of 1974 and 2010-2011, led to the history of long range forecasting in Australia. The pioneers in this field were Clement Lindsay Wragge, Indigo Jones and Lennox Walker. As Dick explained they based their long-range weather forecasts on sun spot activity and planetary cycles. Although Jones failed to have his methods recognised as soundly based, his forecasting successes were widely acknowledged.

Today weather forecasting is linked to changes in sea surface temperatures. Dick explained that El Niño is defined by prolonged warming in the Pacific Ocean sea surface temperatures and typically happens at irregular intervals of two to seven years. Similarly, La Niña conditions and episodes are defined for cooling. In 1788 La Niña conditions prevailed, only to be replaced by El Niño, hence the drought that resulted in the colony’s ‘hungry years’.

Throughout his interesting and informative overview of Australia’s weather, integrating meteorological analysis with an overview of its impact on our history, Dick Whitaker engaged his audience and provided them with a better understanding of that perennially ‘safe’ topic, the weather.

Because of dry years from 1904, severe El Niño events in 1914 and 1915, and the pumping of water for irrigation, in 1915 the River Murray dried up completely. Families took the opportunity to picnic in the river bed at Barham

1 thought on “Droughts and flooding rains”