Imogen Dixon-Smith (Master of Museum & Heritage Studies, University of Sydney) explains how her prize-winning essay came to be…

The development of the paper I submitted to the Public History Prize in 2015 started in a university subject I was taking titled ‘The Idea of Heritage’. I was set the task of pursuing a self-directed research project. Instead of the usual parameters and guidance of set questions I was faced only with some suggested topics. One stood out to me: heritage and gender. The night before I was due to present on my direction for the project I hit a problem. There was almost no literature addressing the intersection of these two subject areas. I scrambled all night researching the incorporation of gender studies into the historical discipline in the hope I could suggest models for its application in heritage. Studies had dealt with women in heritage and public history but there seemed to have been no consideration of whether heritage sites, which are a specific mode of presenting and engaging the public with history, were perpetuating or complicating historic notions of gender. Discovering this gap spurred me to write my paper: Keeping up with the times: a study into the capacity of a heritage site to naturalise or complicate understandings of gender.

I wanted to contemplate how the act of walking into a historic house and becoming immersed in a historical context, detached from contemporary life, influences the visitor’s understanding of gender. Does this contextualised environment confront them with notions about gender that prevailed at the time? Or does the interpretive layer of a heritage site complicate out-dated notions of gender by suggesting these are biologically determined?

I used the historic house, Meroogal, as a case study. Robert Thorburn built Meroogal on the outskirts of Nowra in 1886 for his widowed mother and four unmarried sisters. It remained in the family until 1985 when it was acquired by the Historic Houses Trust (now Sydney Living Museums). Three of the sisters’ unwed nieces joined the household in the mid-1930s; the house passed into their ownership following the death of their youngest aunt in 1956. Thus, the house was occupied almost exclusively by three generations of single women, aside from a short period following the death of Robert’s first wife in 1888.

As a domestic dwelling Meroogal was a logical choice for considering the construction of gender at heritage sites. What made it a more convincing choice was the fact that the women lived in unique circumstances. Without a man present, the women’s experiences in the house were often inconsistent with the essence of what was considered female. The women lived by meagre means but created elaborate routines to ensure all housework was completed by the afternoon, enabling them to pursue a life of middle-class leisure in the evenings. The house thus allowed the women to support themselves without the help of men and uphold a social status they would not otherwise have been designated. Their embodiment of traditional gendered identities was complex. I wanted to investigate whether Sydney Living Museums had captured the possibility of interpreting the site to reveal gender as a social and cultural construction. 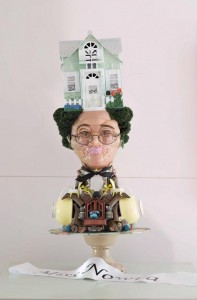 I was heartened to find that some of Meroogal’s interpretive approaches did in fact achieve this goal. By subverting the traditional focus of heritage interpretation and including contemporary artistic interventions in the space, the visitor is forced to critically consider the gendered roles and identities presented to them in the house. Although the scope for analysing the ways in which heritage and gender intersect is vast, this paper sought to make a small step towards that project.

6 thoughts on “Keeping up with the times: gender and heritage”