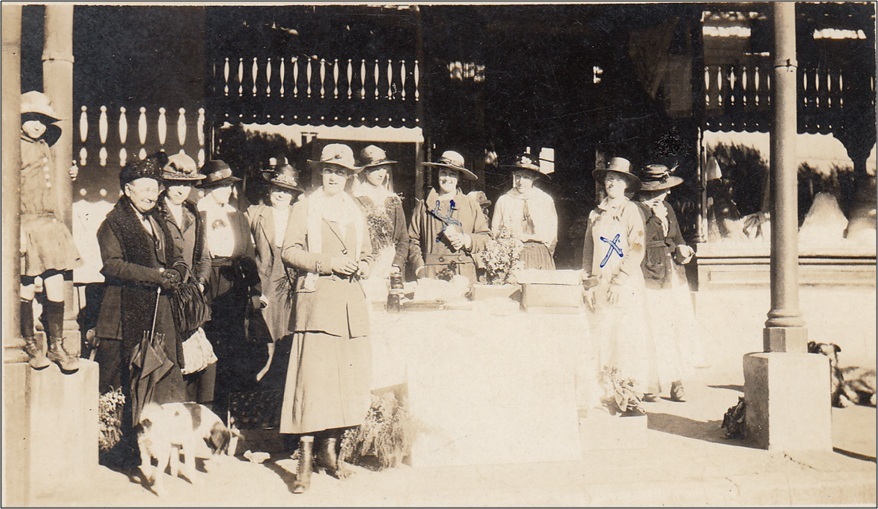 Ian Willis reports on a public lecture he presented on 9 October 2013  at the Camden Historical Society  called ‘The story of the Camden district Red Cross in war and peace, 1914-1945’.

This is a wonderful story of conservative country women doing their patriotic duty in an outpost of the British Empire. From 1914 Camden district women joined local Red Cross branches and their affiliates in the towns and villages around the colonial estate of the Macarthur family at Camden Park.   They sewed, knitted and cooked for God, King and Country throughout the First and Second World Wars, and during the years in-between. They ran stalls and raffles, and received considerable community support through cash donations from individuals and community organisations for Red Cross activities.

The Red Cross was national federation of state-based divisions, with a place-based branch network that attracted middle class women as volunteers. Under the enlightened leadership of founder Lady Helen Munro Ferguson, local branches across the country harnessed and thrived using parochialism and localism for national patriotic purposes . The society re-enforced this with an iconography that presented the organisation as mothers and guardian angels  to wounded soldiers on the battlefield.  The Red Cross encouraged  women  to immerse themselves in the ministering angel mythology and serve  ‘their boys’ by volunteering at branch sewing circles and fundraisers, and as voluntary aids at  military, civilian and Red Cross hospitals.

Camden’s Edwardian women, Enid Macarthur Onslow, Sibella Macarthur Onslow and their ilk, provided leadership at a local, state and national level.  These women were intelligent, wealthy and powerful with extensive transnational networks between Camden, Sydney, Melbourne and London. Their families, along with others from the district, provided their fathers, sons and brothers as  imperial warriors for Australia’s overseas military excursions from the time of the Boer War, and local women worked to support ‘their boys’. The leadership group created ground-breaking opportunities that empowered country women and allowed them, within the strict confines of rural life, to exercise their agency by undertaking patriotic activities for the first time.

The experience of these women was highly personal, sometimes tragic, always inspiring as they devoted their lives with missionary zeal for the Red Cross cause. In their wake the women created the most important voluntary organisation in district history, a small part of the narrative of the Australian Red Cross, arguably the country’s most important not-for-profit organisation. Their stories were the essence of place, and the success of the district branches meant that over time homefront volunteering became synonymous with the Red Cross. Local Red Cross volunteering in war and peace provides a small window into the national and transnational perspectives of one of the world’s most important welfare organisations.  [Ed.note: Vol 10, No 2 (2013) of History Australia contains several articles on the International and Australian Red Cross societies.]

This work, and other local studies like it, are few and far between. Those that do exist tell the story of ordinary people in extra-ordinary times.  Local studies are part of the appeal of Australian history and have an enduring popularity. Unfortunately many dismiss them as unimportant, therebydevaluing their potential to provide a useful model for historical research. This lecture is part of a larger project funded under the Australian Government ‘Your Community Heritage program’ and is supported by an exhibition currently showing at the Camden Museum (see http://www.camdenhistory.org.au) until late 2014

1 thought on “Ministering angels to our warriors of Empire”