… by Sue Castrique, author of One Small World: The History of the Addison Road Community Centre.

Some PHA members may recognise the photographs that make up this panorama. They were once identified as being in Kensington; the tall building thought to be the Old Tote Theatre. They are, however, the Addison Road army depot in Marrickville. The two-storey building was the 14th Field Brigade office. The polo was a match final, played in September 1934 with the Ashton brothers, international stars, who drew a huge crowd, as well as Sam Hood, the photographer. 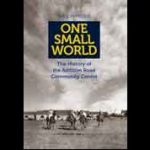 In the peace after WW1, strong ties had developed between Marrickville and the army. The depot helped repair men damaged by war, gave jobs and meaning to unemployed ex-servicemen, and became a social hub in the community. Whether it was polo, trick riding or gymkhanas, there was always something going on at the depot and it was very often free. The 14th Field Brigade building, known as the most beautiful building on site, regularly hosted Saturday night dances, as well as the end-of-season polo ball for the 1934 match.

In 1976, soon after the depot became the Addison Road Community Centre, the 14th Field Brigade building burnt down. With its loss, the memory of it went too. It is now the site of The Bower, a reuse and repair centre. The building on the left of the photo remains and is now home to Reverse Garbage.

It’s hard to believe looking at the Hood photographs that horses pounded at full gallop over what is now a crowded car park. Yet the landscape of these 1934 photographs had already been altered. A freshwater creek ran through the site, one of several that flowed through the kangaroo grounds and fed Gumbramorra swamp. Cooks River was tidal and salty, so these creeks were an important source of freshwater, both for the Cadigal people and Europeans. When the army arrived in 1913 the creek was channelled into pipes underground. This didn’t entirely control the flooding, which still occurs and tends to follow the old creek bed.

That the site has survived as open space in the inner west is remarkable. Since 1852, it had been kept intact as a family market garden, even as housing encroached. Acquired by the army, they defended their presence in the suburbs and refused to move despite intense political pressure after WW2 to give the site up for housing. When they finally left in 1975, the Department of Urban and Regional Development (DURD) intervened, mediating a fierce contest from local government and the local federal member, Fred Daly, who expected housing on the site. Instead, with DURD’s backing, local migrant groups created a community centre. The distinctive layout of huts and open space was valued by migrant communities. It suited multiple groups with multiple purposes, and the old unrenovated army huts were affordable. The Centre became an important multicultural experiment, used for festivals, performances and migrant welfare: a refuge in an English-speaking world.

If there’s a lesson in why this patch of open space has survived, it’s that a community needs not only housing but also a gathering place. The Addison Road Community Centre is now probably best known for its markets. It also provides space to a variety of community groups and is well-loved in the inner west. It has become a compass point in the landscape, a key to local identity now, just as it was to very different communities in the 1970s and 1930s.

Today, as Marrickville disappears into council mergers, and landmarks vanish beneath the WestConnex motorway and high-rise housing it underlines for me, more than ever, that we need local history.

Sue Castrique’s One Small World: The History of the Addison Road Community Centre, is available from Gleebooks, or online at: www.arcco.org.au/programs/the-living-museum/one-small-world-by-sue-castrique