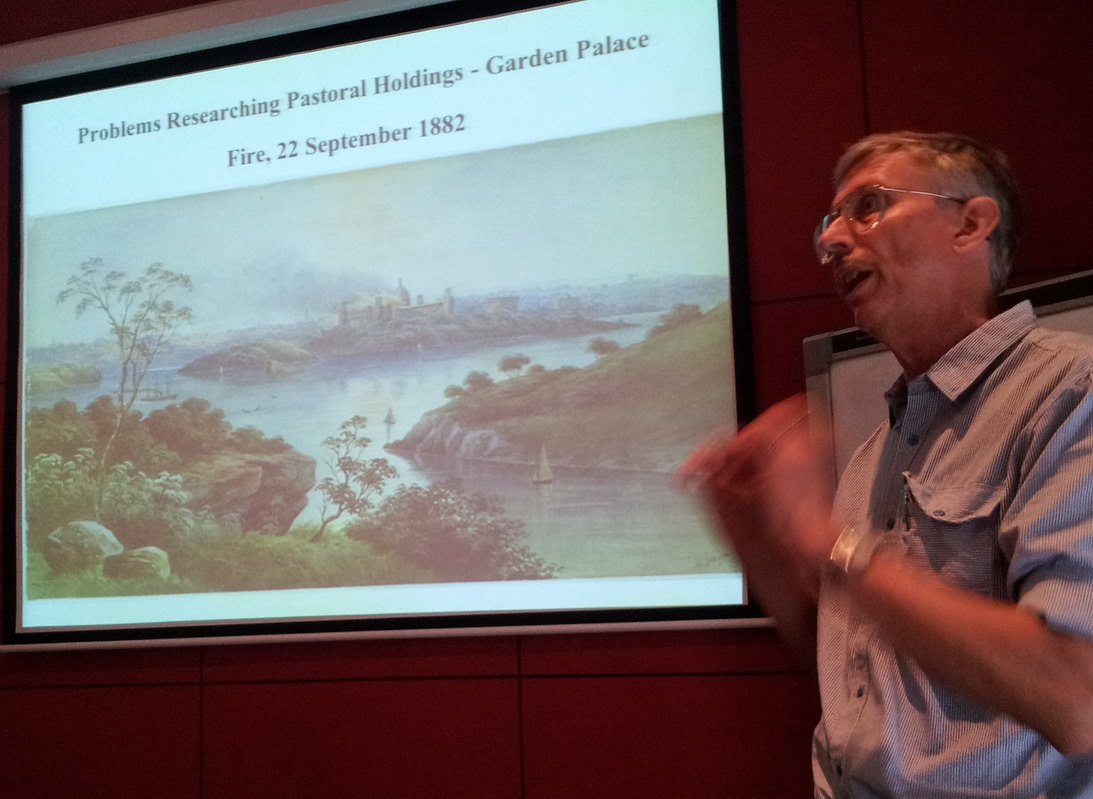 PHA NSW’s March CPD session on Researching the Lands Department Records was attended by a capacity audience of over 30 people. The purpose of the workshop was to provide researchers with the tools to locate information in the records of the NSW Lands Department held by State Records at Kingswood.

The workshop was divided into two sessions, led by two PHA members: Dr Terry Kass, consultant historian and author of many historical and heritage studies, whose research has furnished him with an extensive overview  of  land records held in the state’s archives; and Dr Caroline Ford, a historian working in the NSW Office of Environment and Heritage whose thesis, archival fellowship and book research has provided her with total immersion in the delights and disappointments of the Lands Department records of Sydney’s coastal areas.

Terry opened with a brief summary of the history of land administration in NSW and the creation of the branch organisation of the Lands Department from 1867 and an overview of the broader perspective of historical information obtainable from Lands Department records. Maps and plans of land ownership and tenure also provide detail of soils, vegetation, topography, rivers, roads, beaches, parks and reserves. Collectively these records illustrate the development of towns, urban and rural areas, industry and mining as well as social policy on land settlement and free selection and the history of surveying.  Letters, petitions, leaflets or posters that flesh out the bones of maps and plans can be found in the Lands Department Branch Correspondence Registers.

Many of the key tools for locating this information (Crown Plans, Parish Maps, Tenure Registers and Cards, NSW Government Gazette, Certifications of Title and Correspondence Indexes) are available online. The digitisation of the Historical Parish Map collection of 35,000 maps has enabled online searching via the Historical Land Records Viewer on the NSW Land & Property Information Spatial eXchange portal at www.six.nsw.gov.au

Terry stepped us through the process of de-coding  map references to locate a file that could be tracked through the Correspondence Registers to the final ‘Put Away’ notation ( and the delight of actual filed papers) or the final MON notation (and the disappointment of no file at the end of the trail). Other possible exasperations were the black hole of a mysterious and massive file cull by the Lands Department Ministerial Branch of its registers between 1952 and 1954. (Terry suggested ways of researching around this, and other  glitches).

Caroline’s talk on the ‘Diary of an archivophile’ built on the cheers and tears of land records archival research with particular reference to her forthcoming environmental and cultural history of Sydney’s beaches. She focussed on the wealth of historical data the Correspondence Registers of the Miscellaneous Branch of the Lands Department can point to. Unexpected gems Caroline tracked down  included a beach file that documented  a 35year debate on the public right to free access to Sydney’s beaches. This detailed the  public and ‘experts’ views and the seismic shift in government thinking from resistance to acceptance. Other discoveries touched on environmental history (shoreline reclamation and change) and on various elements of social history (lobby groups, homeless people, recreational campers, the Country Women’s Association and the shark net debate) that contribute to the fine weave of social history fabric.

Offsetting these delights, Caroline listed some of the disappointments of her archival research: the 1950s Ministerial Branch records cull meant  there are no lands records for Bondi Beach between  the 1880s and the 1950s—its entire period of major development as a recreational site. And of the 330 files she tracked through the Correspondence Registers to their conclusion, only 147 files (45 per cent) were available, the rest either destroyed or sent to other branches of Lands or to other departments.

The sum of the two presentations provided us with a clear methodology for navigating Lands Department records, an awareness of some of the pitfalls and dead ends involved (with possible ways of working around these) and an insight into the unexpected wealth of material that can lie buried within the Lands Department files at Kingswood.

Our thanks to the presenters and to PHA NSW Vice-President Christine Yeats for organising this event.