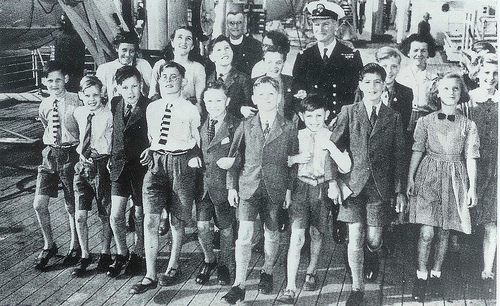 A good crowd turned out at Sydney’s Mitchell Library on Saturday 23 March  to hear a morning of fascinating talks and discussion about the Forgotten Australians and Former Child Migrants National Oral History Project, conducted by the National Library of Australia between 2009 and 2012.  The project was funded by the Australian Government through the Federal Department of Families, Housing, Community Services and Indigenous Affairs.

The project consists of more than two hundred interviews, conducted across Australia and beyond, by forty-one interviewers. It brought to light the experience and lifelong impacts of childhoods spent in (mostly institutional) ‘care’. Interviews were also conducted with relatives of those brought up in care, along with policymakers, administrators and workers in various ‘homes’ for children. Dr Joanna Penglase, whose PhD thesis first drew attention to this widespread but largely invisible and unacknowledged phenomenon, spoke movingly of the psychological, political and historical importance of the project, and alluded briefly to the personal experience that first prompted her research. Dr Joanna Sassoon, who managed the project for the National Library, talked about the many complexities and sensitivities of projects such as this one, including the need to reassure the people who were the primary focus of the project that it was historically important and valid to also record the stories of the people who worked, in one or another, within the ‘care’ system.

The second part of the morning was given over to four oral historians who worked on the project under Joanna Sassoon’s management. Roslyn Burge, Frances Rush, Virginia Macleod and Jeannine Baker all talked succinctly about different, and challenging, aspects of the interviews. Their presentations ranged across such subjects as the difficulty of retaining emotional detachment; the way in which accounts between husbands and wives, or parents and children, can produce opposing perspectives; the necessity for support and de-briefing with the project manager; and the deliberate use of fabricated stories to draw attention to wider truths. The wide-ranging approach meant that although cruelty, neglect, and abandonment appeared in many accounts, so also did stories of personal and professional success, social competence and, not least, the ability to achieve happiness. Planning, methodology and management were key to the project’s success and it is a testament to the team that in spite of the extreme sensitivity of much of the subject matter only one interviewee has withdrawn their material from the project.

An adjunct to the project is the collection of memoirs, autobiographies, papers, photographs and other ephemera associated with the experience of ‘care’. These items are now catalogued in the National Library. See http://www.nla.gov.au/sites/default/files/ohbooklet_forgottenaustralians.pdf