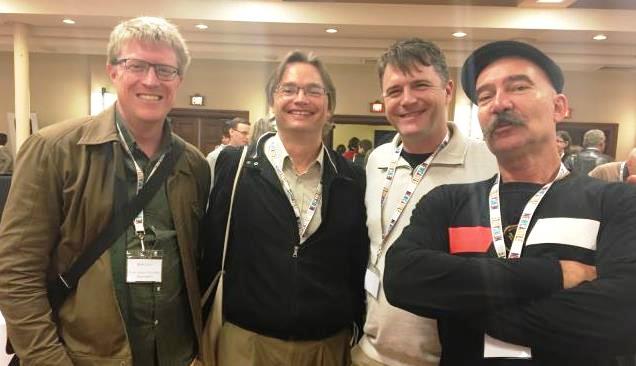 This year the 36th Annual Australian Historical Association (AHA) Conference was held in Newcastle. Out of over 300 delegates giving papers, at least 18 PHA NSW & ACT members were present and presenting. This was great to see and represents the largest number in a few years.

This year’s theme was Entangled Histories, the word of the moment for many history streams and one that was readily embraced, in one form or another, by most presenters.  It was particularly pertinent for those of us who are looking at Aboriginal history, environmental history and urban history.

The AHA is a busy conference, set over 3 ½ days in early July, with evening events, book launches and social functions scattered throughout. The nature of the program means there are numerous clashes between sessions so it was heartening to see (and hear from reports) that our members’ papers were all well attended and received. And this is one of the pleasing aspects of the AHA these days: while it is dominated by academic and postgraduate papers, those papers given by public historians are attracting more attention. The ways we public historians present our work to larger, less traditional history audiences is of increasing interest to many academics, particularly those younger or early career researchers who are witnessing shrinking opportunities in the university sector.

The topics covered by our members were many and varied. They included the collaboration with artists and performers to re-imagine and re-present the archives (Lisa Murray); oral histories and tours and collections (Carol Roberts); the rise and fall of Australian heritage seen through oral histories of practitioners (Bronwyn Hanna); environmental history of business (Jodi Frawley ); the environmental eye of surveyors (Terry Kass); Anzacs and the Red Cross (Ian Willis); the women in occupied Germany (Christine de Matos); the impact of anti-German campaigns in South Australia in WWI (Bruce Baskerville); the emotions of family history (Tanya Evans); and the role of the History Council’s around Australia (David Carment).

A number of members were also presenting on their research into Aboriginal history including Jennifer Debenham who has been working with Lyndall Ryan and others at the University of Newcastle to produce an extraordinary map of massacres on Australia’s colonial frontier.  This online, and ongoing, project was launched at the conference and received national media attention.  It can be accessed here.  Stephen Gapps, Michael Bennett and Paul Irish also presented a panel on troopers, Trackers and Personal Connections with Aboriginal people in the Colonial world, which I chaired, making it a full PHA session (see image).

As next year’s AHA is to be hosted by ANU in Canberra, it would be a great opportunity again for our NSW and ACT members to attend and present on the growing field of public history.