Like many visitors to Washington DC, my first stop was the National Mall. There on a wet week day, most people stood in awe of the Lincoln Memorial; a few braved the rain to walk the length of the sombre 247 feet (75 meters) of the Vietnam Veterans Memorial. This is a commemoration in stark contrast to traditional war memorials: 58,000 names carved into a dark granite wall that stands slightly below ground level, a further reminder of the fate of most of those here. (Each name is accompanied by a symbol designating its status. A diamond  denotes that the service member’s death was confirmed. A cross indicates the person had missing or prisoner status at the end of the war and remains unaccounted for. In the event a serviceman’s remains are returned or he is otherwise accounted for, the diamond symbol is superimposed over the cross. If someone returns alive, a circle, as a symbol of life, will be inscribed around the cross. No such cases have yet occurred.)

The lack of heroic design in the winning entry by the then 21-year old architecture student, Maya Lin, was not universally liked. A group of Vietnam veterans referred to it as the “black gash of shame”. To cater to more conventional tastes, a sculpture of three soldiers (right), 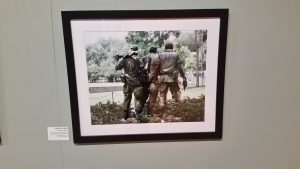 along with an American flag mounted on a 60-foot pole, were placed near the monument — close enough to be part of it but far enough away to preserve Lin’s artistic vision. The creator of this work (who had come third in the original competition), Frederick Hart, explained:

I see the wall as a kind of ocean, a sea of sacrifice that is overwhelming and nearly incomprehensible in the sweep of names. I place these figures upon the shore of that sea, gazing upon it, standing vigil before it, reflecting the human face of it, the human heart. 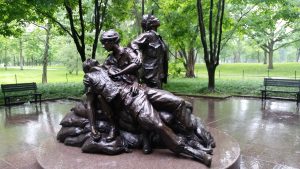 In 1993, another sculpture (left), to the women involved in the Vietnam War, was added to the memorial site. Today, around 10,000 people a day visit the wall, its polished surface reflecting their own image as they contemplate the costs of war.

Close to the other end of the Mall, in the National Building Museum, is a small exhibition created by a group of local teenagers. They explored the city’s monuments to see how their city ‘remembers and honors the past’. Here, several decades after the creation of the Vietnam memorial, the same diversity of taste emerges.

For Rhoddy Andjalepou, whose picture (above)  is of the figurative statues, these make the memorial more comprehensible and commemorative.

For Gabrielle Crockett, on the other hand, the physical contact with the wall, where she was able to find her uncle’s name, Will Isaac Jr, and 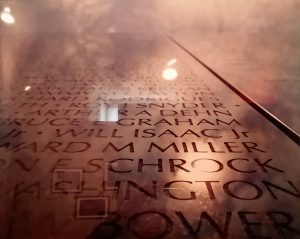 take a rubbing, was ‘exciting’.

All came away from the experience understanding that every memorial has a story waiting to be told.