… the latest in the occasional series introducing PHA NSW and ACT members.

What is your current position/area of historical interest

I am transitioning from full-time administrative work to part-time casual so that I can concentrate on building up a new career as a professional historian.

I have wide-ranging interests but my main focus is Australian theatre history. I am currently researching the Sydney Players’ Club, an amateur theatrical society that gave the first performance in Australia of a number of European and British plays in the 1920s and 1930s.

I have always loved history, but didn’t think of turning it into a career until relatively late in my working life. I did secretarial and administrative work in the tertiary and not-for-profit sector for 35 years, at the same time as completing a BA and Master of Letters. Most of the courses I completed were in history subjects, predominantly nineteenth century British and European history. When I was searching for a topic for my MLitt dissertation, I decided to combine my passion for history with a love of theatre. I developed this interest further with my PhD thesis. Once I began my research into the history of New South Wales country dramatic societies, I loved piecing together evidence from many different sources, including archives, ephemera and memory. I realised I should have made history my career a long time ago.

I want my history to reach a general audience in a way that sparks interest and prompts people to ask questions of their own, rather than take what they read and hear for granted. I also want to write for scholarly journals because Australian theatre history is a relatively recent academic discipline and there is still a lot of ground to cover. Theatre can tell us a great deal about changes in social, economic and political life.

Companion to theatre in Australia, edited by Philip Parsons with Victoria Chance, was published in 1995 and has never been updated, but it has been an invaluable source over the years. I read it from cover to cover to identify gaps which gave me the starting point for my thesis topics, and I still use it frequently for reference.

Victorian Britain has always fascinated me because of the massive changes that took place as a result of industrialisation. It would have been exciting to travel by train during the early years of the railways. I grew up close to one of the first passenger lines in the world and I have always been mad about trains.

History is important on many levels. Every time I go to the State Library I see people researching their family history, trying to find out where they came from and who their ancestors were. History helps us to understand the present. I knew very little about Australian history when I emigrated from England over 30 years ago, and if I hadn’t taken an interest, I can’t imagine how I would make sense of the world I live in now. History is constantly being re-interpreted from the perspective of the present and in the light of fresh evidence, so we must never take anything for granted. We need to keep asking different questions and challenging received accounts.

I am also a great believer in telling personal stories because they help us to recover history that otherwise might never be acknowledged. I am thinking of the people I interviewed who were involved in country dramatic societies in the 1950s and 1960s. These groups had been overlooked by theatre historians because they were “amateur”, but they were a valued part of the local community and, in some cases, they changed people’s lives. 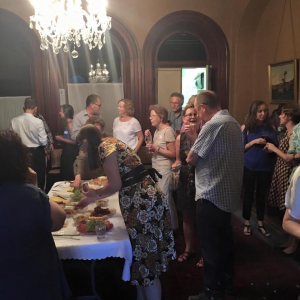